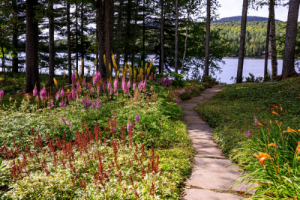 Numerous studies have demonstrated that spending time in nature can improve the body’s immune response.
Trees release something known as phytoncides, which are chemicals they emit to protect themselves from insects and to fight disease. But it turns out that phytoncides can also help humans fight disease by contributing to the increase of white blood cells in our bodies that kill tumor- and virus-infected cells.
Research by Japanese scientists reveals that spending time in nature, also known as “forest bathing,” increases the activity of these so-called natural killer cells as well as intracellular anti-cancer proteins—and the benefits can last for more than 30 days after forest bathing.
There is no better way to gain the immune-boosting power of nature than to be surrounded by water, forests and starlit skies.

Are you ready to begin  your 5 Minute Journey to Inner Peace?

Enter your name and email below to get started.

Success! Your Free 1 Minute to Inner Peace Audio is on its way! Check your inbox!